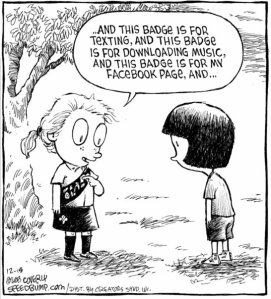 When I was the right age for such things, my parents let me join the Brownie troop in our neighborhood in Lakewood, Colorado. I went long enough to make some observations that led me to resigning my commission before even getting the uniform or earning any badges.

What did I observe that soured me to this fine institution?

Well, to be blunt, I wasn’t fond of dues. They wanted 10 cents a week (that’s what I remember, anyhow), but for what? The activities (sing a song, say a pledge, hear a lecture, do a craft, play a game) were not as good as what we did every week at church and at church those things were free. If I forgot my dime, someone kept record of it and I had to pay up double the next week. At church I often brought an offering, but no one kept track of how much I gave or how often. Well, no one except God, who knows everything and actually saw my pennies and nickels and dimes as a fine offering when they reflected a cheerful heart of gratitude.

I’m sorry that we never got to the stuff that I would have liked a lot — but in Brownies in the 1960’s there would have been far too much stuff I felt awkward about to make it worth while. I would have loved fire-building and cooking. I could have tolerated baking since there is a fairly immediate reward to that skill. I could have faked the sewing stuff, but would not have enjoyed doing it all that much.

Besides all of that, it was after school in someone’s basement and that space was dark compared to my back yard which was always (in my memory) flooded with light and fresh air.

I lasted a few weeks. I’m a little surprised that my parents “let” me quit — they must not have been worried about this becoming a recurring pattern of quitting. I don’t even remember the conversation, come to think of it.

My name is Ruth Hubbard and I am a Brownies drop-out.