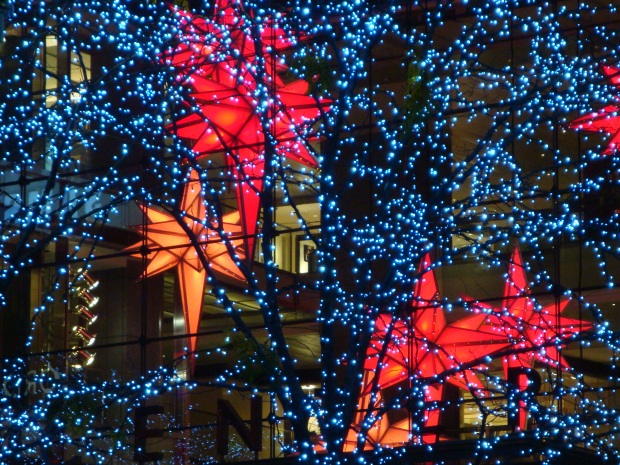 Lights on Columbus Circle in MidManhattan

This past week I traveled to Dallas Texas where we experienced a lot of rain and even some snow as we traveled between here and there and back again. I was able to give an update on what’d happening in Wycliffe USA to those who gathered for a “Center Meeting” on the International Linguistics Center campus on Tuesday afternoon. All day Wednesday the Executive Team from Wycliffe USA met with the same from SIL International at Oak Cliff Bible Fellowship.

Thursday I traveled (with Erica Shuler) to New York where — along with Bob Creson and Paul Edwards — we participated in the annual meeting of the North American Forum of Bible Agencies. And then Erica and I stayed around until mid-day on Saturday (instead of flying out late on Friday) to see a bit of the city that never sleeps.

I did a little bit of Twittering and Facebooking (mostly posting images on occasion) those days, but not blogging. I’m not going to try to go back and catch up with things at this point. Or not so much. These photos (click on image above — it is a link to an album) will give you an idea of the fun part of that 48 hours (almost exactly) in New York.

This morning, this is my expression of resistance and hope. Later today I will put my feet up and read a new book...savoring words and ideas.
Pick ‘n Save offered all florals for 50% off and I didn’t even consider whether, only which. #beautyisresistance #choosetherightquestions #yesthatisarotaryphone
Look what I just found in a small stash of business cards! An “artattoo” of...what was his name? Cliff?
It seems like saying anything more than what Dr. ABC has said here is more than unnecessary, so I’m adding nothing.
When you take advantage of a work meeting/lunch in Rochester and don’t get home until after your bedtime.
Yesterday—between the intense, beautiful, full-scheduled InterVarsity Staff Conference and a crack of dawn flight back to Madison today, I invested a day to recharge my introverted-self battery. I’m grateful for the hours+miles with @ileang8tr that included a bird-dominated stretch in a place where earth, water, and sky meet.
A wee rest.