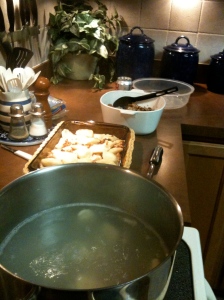 I took pierogi to the annual international food festival lunch at work today. I’d never made them before. When I searched the internet looking for recipe options, I quickly realized that this dish, if made from scratch, is simply not simple. It’s not difficult, really. Just time-consuming.

The ingredients shopping complete, I made the “pasta” dough and the potato/cheese filling and then formed the individual pierogi (dumpling…sort of) on Sunday afternoon/evening. I made 115 of the little buggers. Once formed, they were put into the freezer on a pan until frozen, then bagged and tossed back into the freezer.

Monday night I cooked up a pound of bacon with a couple of cups of fresh mushrooms and two chopped onions. That all got stashed overnight.

Tuesday morning the big pot of water was put on to boil around 5 am. Then I reheated the bacon mixture (just enough to re-melt the fatty goodness of it) and boiled the pierogi. I could put about 10 in the pan at once. They dropped to the bottom and then floated when they were properly cooked.

I ladled them into the Pyrex — covering each “layer” with bacon-y yum. All of this was covered and toted to work where it was delivered to the activity center kitchen around 10 with heating instructions. It was served with sour cream.

I took a few (I don’t always eat what I bring to a pitch-in/pot luck/covered dish meal) since I’d never had it before and wanted to evaluate it. How can mashed cheesy potatoes in a sour cream pasta packet served with bacon/onion/mushroom and sour cream be bad?  I think when I make this again I’ll modify it a bit — maybe try some of the many traditional options just for fun.

I also think I’ll invite someone or someones to do it with me. It would be more fun that way.