Max Hsu's photography of Sara Groves shot on location in Minneapolis. This was the photographer's favorite (according to his blog) of a set shot for no-longer-publishing Radiant magazine's cover.

On Sunday morning–early–Dad and I picked up Lisa Meharry and headed west to Clearwater, Florida for a free Christmas concert hosted by a local church and featuring Sara Groves. If “FREE” and “CHRISTMAS CONCERT” were not enough to get me out of bed rather earlier than usual (and they would not have been), “SARA GROVES” certainly was. I’ve long loved this woman’s music and couldn’t believe that my first time to hear her live was also going to be super kind on the budget.

There are two things I want to marvel at relative to this event, and I’ll start with the most tangible and less important (though admittedly, rather significant none the less). I fully expected that we were headed to a rather large church for this free concert. It was, in fact, one of three free concerts they were sponsoring over the weekend feathering Sara Groves. Truth is, I was expecting something in the category of mega. 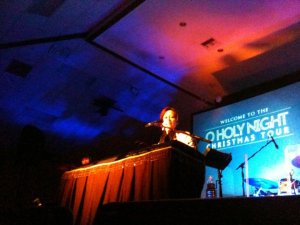 I was wrong. The church sanctuary–filled to the edges with borrowed from other spaces chairs–might have seated 500. On Sunday morning, there were more like 220 in the room. We arrived just minutes before the doors opened and ended up on the second row just off-center. Maybe ten feet away from Sara and her keyboard. This was a spectacular surprise. I’m actually glad I didn’t know.

The second thing is the fact that, well, I wasn’t disappointed.

I’ve listened to Sara’s music for over a decade. I shared with someone a month or so ago that if it’s possible, Sara has discipled me through her music and lyrics in many ways. When I say I’ve long been a fan, I mean more than “fan.” That word conjures up images of posters and t-shirts and emerging fanaticism.

The danger (?) with any artist is that if you do connect with their work at a deep level–as I do with Sara’s–then it’s likely that you’ll fill in the blanks of the rest of who they are. You will create their humanity around the part of them you’ve known.  Thankfully, experience has tempered this imagining-assuming in my own head to be far less idealistic than when I was 13.

After seeing Sara this weekend, I can say that everything I saw in her and heard from her in that space reinforced all I’ve imagined/assumed about her for many years. Yes, I know that it was a concert with a stage and a planned program–but there was a discernible sense of sincerity and vulnerability within the context of it all.

What does this mean? It means I’ll keep listening with abandon to her music. I’ll keep buying everything she records before listening to it because I have grown to trust her.  It means I’ll continue to be different than a fan, but maybe more of a fan than I thought.

What is your favorite Sara Grove’s song?

3 thoughts on “Sara Groves: Up Closer-than-Usual”