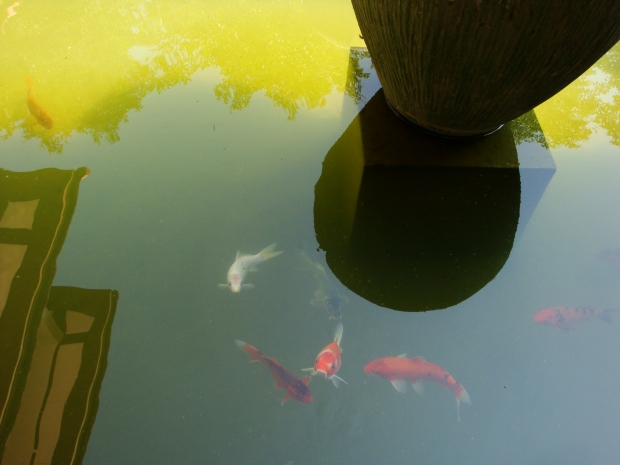 Here’s a memory. I remember going as a teen-ager with my Uncle Elmer and Aunt Louise and my parents to a local favorite in Omaha, Nebraska that featured carp on the menu. It’s now been featured on Diners, Drive-Ins, and Dives, proving once again that my family was cool before cool was. (We tell ourselves that, anyhow.) The place is called Joe Tess Place. It was established in the 1930’s and is really proud of the carp it raises and serves.

Why am I writing about carp, you ask? (Okay, you probably aren’t asking. I am asking. Great, I talk to myself on my own blog.) Well, I took this photo of the pond/fountain thing outside our room at the resort in Chiang Mai where I stayed a week or so ago and wanted to be sure that I spelled “koi” correctly in the title. My Google search took me to Wikipedia where I started reading about common carp which were bred for color in China starting over 1,000 years ago and that turned into goldfish. I also read about carp having been domesticated first for food and later for decorative fish in all sorts of places, first in Asia. The term koi means carp in Japanese.

KOI = CARP and that triggers memories about eating carp.

The strongest memory was not so much the eating (which was already overshadowed by the bone-picking) as by my mom’s declaration that she never needed to eat those bottom feeder fish again. Having mostly not eaten any “fish” or “seafood” in my growing-up years except the stuff that comes if “stick” form or from McDonald’s as a McFish sandwich, I wasn’t all that put off by the carp. I was admittedly influenced by my own admiration of my Uncle who I thought carp was rather wonderful and who seemed to like the stuff.

Of course that was before I had salmon in Seattle or lobster in Boston or omul in Siberia. 🙂  Way before.

Now I’m totally with my mom and prefer to leave the carp in the river and the koi in the ponds where they provide occasional photo ops. Beyond that, thank you but no. There are better fish to fry…or bake or broil.

One thought on ““Koi” sounds so much better than “Carp””