Whenever God does something new, he involves people — often unlikely people, frequently surprised and alarmed people. He asks them to trust him in a new way, to put aside their natural reactions, to listen humbly for a fresh word and to act on it without knowing exactly how it’s going to work out.

I’ve been thinking about what I do to stay safe — to keep from being in a place where I can be alarmed by God’s invitation to a new thing. 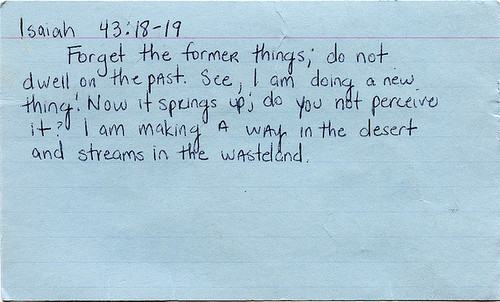 I want to do less of the hiding stuff .

Kind of like I want to run a 5K race. (And before I write another word, let me speak to those of you who think all I need is a plan — the distance between me and running is barricaded by far more than the lack of a plan.) I imagine it and even set my intentions toward it in those hours just before I go to sleep. It’s easy to have good intentions then. But when the alarm goes off early, that’s when I hit the snooze and in doing so pound myself back into the place where it will never happen.

I want to be brave. (And yes, I have that song on the REMEMBER playlist.)

I want to run and not grow weary.

I want to walk and not faint.

So, with a measure of fear that I’m announcing this so publicly, I am asking God to use His Word and His Spirit in me this season of Lent to prepare me for whatever NEW anything He has in mind. This is not me making a pre-announcement of something I can already see on the horizon. I have no idea what the NEW thing might be or how it might play out. I’m just putting myself here in this space and saying YES.

One thought on “Losing control”