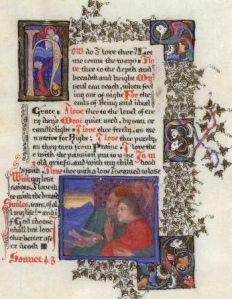 Like many girls trying to survive the confusing hormonal insanity of puberty, I started writing overtly emotive poetry when I was in junior high and kept writing through high school (and beyond). A rather embarrassing assortment of these scrawled tomes exists in a collection of journals and  shoeboxes in my home office and closet. If I die before I do it myself, I expect a friend to burn the whole lot in a bonfire — marshmallows optional, but recommended.

Over time I produced better poems as my skills developed. And yes, there were fleeting dreams of being a published poet known for depth and insight and just the right words. Eventually I gave that dream up for other dreams.

I discovered that through the process of writing, my  inner world began to sharpen. I believe that finding words and putting them on paper helped me clean out some of the clutter and chaos that seeps into the adolescent mind and hear.

At some point in my twenties — a decade that had it’s fair share of left-over consternation and a bit of new-found angst — I continued to write. Poetry gave way to journaling on occasion.

And then, on a day when I was tossing and turning internally — torn between what I was feeling for a man who had unexpectedly caught my emotional attention & capturing it far too completely for my own good and what I was thinking as a woman on a mission — my dear friend Suzie started messing with my head. She challenge me to try something more difficult than the modern free verse stuff I wrote as “therapy.”

Her recommendation: the English sonnet.

I took the challenge as an amusement and began writing these fairly prescriptive tomes. I found the combination of emotions and words with the challenge of a fixed pattern to be an even more therapeutic exercise. Being limited to 14 lines and iambic pentameter with choice of only a few rhyme patterns upped the stakes.

I’ve long ago given up being truly published and then came along the blogosphere where we can publish ourselves with as much or as little editing as we’d like. Silly concept, really.

I’m beginning to populate the space that follows this page with most of the sonnets I completed. It’s a rather small collection really. Some of what you might encounter if you venture onward will have you neck deep in mush and sentiment. Some might surprise you. I feel as if I should hang a sign that clearly states ENTER AT YOUR OWN RISK.