With all the talk in my “give a hoot” blog post, you might be surprise by what you’re about to read. 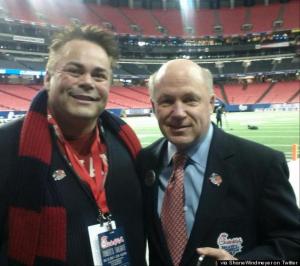 Shane Windmeyer tweeted this photo from the Chick-fil-A Bowl on New Years Day.

You’re not surprised to hear me say that I want to be more like Dan Cathy — President and COO of Chick-fil-A. But Shane? Shane s a nationally recognized LGBT leader in higher education; bestselling author; and the executive director, Campus Pride. Campus Pride — the organization which launched a national campaign against Chick-fil-A just last year.

Shane wrote a piece on the Huffington Post blog that I read over lunch today — an article which has moved me to write this short blog. I found it because my friend Judy shared it on Facebook, quoting from the article: “It is not often that people with deeply held and completely opposing viewpoints actually risk sitting down and listening to one another.”

I could probably blather on for far too many words trying to say this: I want to be more like Dan…and Shane.

I want to understand more than I demand being understood.

I want to listen more than I demand a platform to spout my own ideas.

I want to extend love and grace more than I want to try to make others fit into a mold that is at least partially of my own design.

That does not mean that I am giving up on trying to more consistently and accurately walk in obedience to God. It does not mean that I am backing off a pursuit of Soul Detoxification that includes eliminating and limiting the cultural toxins I let into myself.  Some might try to tell me that I can’t walk in holiness while hanging out with tax collectors and sinners.